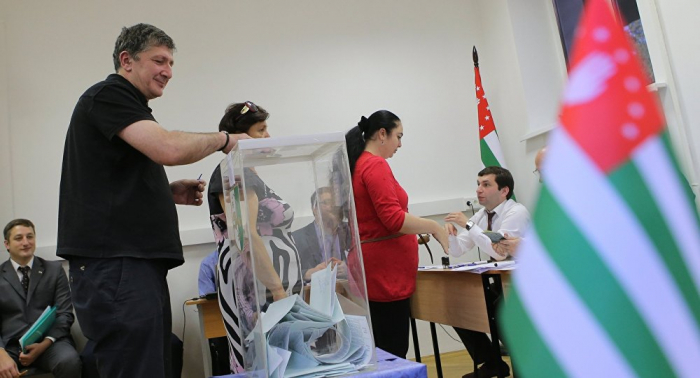 In the occupied separatist Abkhazia on August 25, the so-called "presidential elections" were held. In the second round passed, the so-called  “President” Raul Khajimba and opposition leader Alkhas Kvitsinia.

But naturally, the "legitimacy" of so-called "Elections" was immediately recognized by many observers of the so-called "Republic of" Artsakh ". In fact, Armenia, which created this entity in the occupied Azerbaijani territories. And in the same way, Armenia today seeks transit from Georgia through Abkhazia without its de-occupation, without the return of refugees, and even without giving the Gali region Georgians basic human rights.

The last so-called “presidential” elections in Abkhazia in 2014, in which the Kremlin puppet Raul Khadjimba became the “president,” were held in conditions of “full apartheid”. The right to vote on the eve of these elections was denied to the Georgians of the Gali district, the very ones that prevented Raul Khadjimba from becoming a “president" back in 2004. Then, thanks to these votes, separatist Abkhazia voted for the "lesser evil" - Sergei Bagapsh.

Then Khadjimba several times participated in the elections, and invariably lost, despite all the Kremlin’s efforts to make him “president”. The fact is that Bagapsh and Aquamb, who replaced him, did not particularly suit the Armenian lobby with their "liberalism" in relation to the Galician Georgians. After all, Armenian nationalists, as we know, do not consider Georgians to be people and were outraged that these "subhuman" have a voting right in the territory, which representatives of the "ancient people" already consider their own.

It is clear that the separatists and Armenian nationalists who "shared the trophies" do not even want to return to their homes over 300 thousand Georgian refugees (in Sukhumi, Gagra, Kodori Gorge).

One way or another, but in the end, in 2014 in Abkhazia, with the filing of pro-Armenian provocateurs, they organized a “Maidan” under anti-Georgian slogans, achieved the deprivation of the separatist citizenship of the Georgians of the Gali region of electoral and generally all human rights. And only in this way then Khajimba finally became a separatist “president”.

But besides the humiliation of the Gali Georgians and groveling before the Armenian nationalists for Khadjimba, no other special merits were “noticed”. As a result, in the separatist “elections” on August 25, Khajimba hardly managed to “draw” the first place. In reality, if we discard the falsifications, then Khajimba did not go into the second round.

Moreover, in conditions of complete lack of rights and deprivation of the voice of not only refugees, but also of the Georgians of the Gali district, the question is: who will be the next puppet “president” of Abkhazia? It is up to the Armenian lobby to decide. It is quite capable of “drawing” Khajimba victory in the second round. But this will be a clear brawl. In addition, it is possible that Alkhas Kvitsinia will agree to serve the Armenian nationalists more faithfully, and in terms of intelligence he is clearly superior to Khajimba. Therefore, with a high probability the puppet head of Abkhazia will do it.

Naturally, these “elections” have no legitimacy and only serve to legalize the occupation and ethnic cleansing, which most likely have not yet been finalized. After all, Armenian nationalists are seriously thinking about making an ethnic Armenian, instead of Abkhazian puppets, a separatist “president”. Fortunately, there are all the possibilities for this and the Armenians have already become a majority in Abkhazia compared to the same Abkhazians.