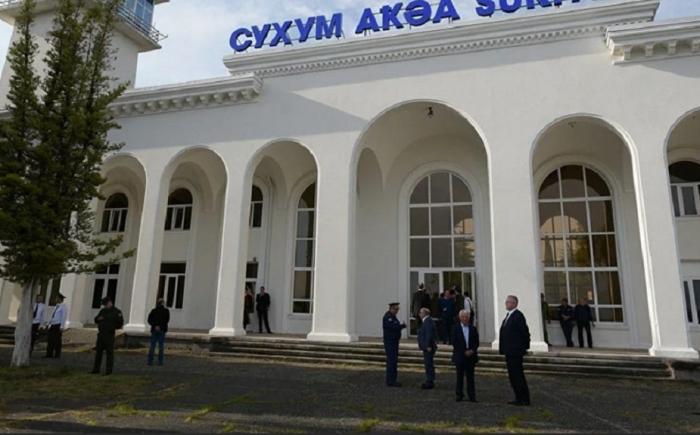 Few people noticed that the new activity of the authorities of the Republic of Armenia on “Breaking through transit” through the separatist territories of Georgia - Abkhazia and the Tskhinvali region coincided with the initiative of the Sukhumi separatists to resume the work of the Sukhumi seaport and Sukhumi airport.

The fact that the activity regarding the “Armenian transit” through Abkhazia and the opening of the Sukhumi airport is not a “coincidence” proves that the puppet “president” of Abkhazia Raul Khadjimba reported about the work of opening air and sea communications in the separatist Sukhumi in front of representatives of the Armenian community of Abkhazia.

In particular, this is written in the material: Raul Khadjimba: “It will take at least a year to open an airport” published on the Echo of the Caucasus website (ekhokavkaza.com):

In particular, it is reported that “a meeting of presidential candidate Raul Khadjimba with representatives of the Armenian community of Abkhazia was held in Sukhumi. At it, the acting “president” announced that it would take about a year and a half to launch the Sukhumi airport, and a year to go by sea. A meeting was held in the meeting room of the Cabinet of Ministers under the chairmanship of the "Prime Minister" Valery Bganba on organizing a regular cruise service on the Black Sea between ports of the "Republic of Abkhazia" and the Russian Federation.

It was announced that already in October of this year, the cruise ship “Prince Vladimir” will enter the port of Sukhumi in test mode...

About the launch of Sukhum Airport named after V. G. Ardzinba and maritime communications have spoken more than once in recent years, but only now have managed to move these issues off the ground. Recently, the Sukhumi airport and airspace of the Republic of Abkhazia has been assigned the international four-letter code URAS.

Raul Khadjimba, at a meeting with representatives of the Armenian community of Abkhazia, commented on the opening of an air service: “As for the airport, I hear conversations that my opponents are conducting:“ Khadjimba is doing this on the eve of the election, and he undertook to do this 20 days before the election. ” It will take time - one and a half, at least a year. But this will already be an irreversible process. I tell you frankly: I received support from the first person in Russia. He supported us in this matter. An investor who invests his money in this work supported us. I think that there is no person who would be indifferent to this process. To say that there will be no airport is a political game. This is harmful for our country as a whole”.

Regarding the resumption of maritime communications, Raul Khadjimba noted that the first delegation from Russia arrived in Abkhazia today to discuss this issue. “I’m sure, I don’t even doubt it, we will have a completely different situation in maritime traffic by the next year,” the article says.

The separatist authorities of Abkhazia "reported" to the Armenian nationalists about the preparation of the "launch" of the airport and seaport in Sukhumi.

Despite the upcoming "presidential" elections, Raul Khadjimba did not report to the Abkhazians themselves. Since the puppet “president” perfectly understands who his “main masters” are.

The “customer” of the illegal opening of the airport in occupied Sukhumi, like the seaport, is the Armenian lobby. And most likely, the government of the Republic of Armenia itself, headed by Nikol Pashinyan.

Why the Pashinyan government needs this is easy to guess. Indeed, in addition to the desire to have a “transit window” to the outside world, the Pashinyan regime, which is essentially anti-Russian, also wants the exit from this window not to be under the full jurisdiction of the Russian Federation. And from this point of view, the separatist Sukhumi, as a “sea” and “air” gate, is ideally suited for Armenia.

The Armenian government plans to organize the transit of its goods by rail to Sukhumi and not only further to Russia. Cargoes can also be loaded in the Sukhumi seaport (this requires the precedent of “opening” the port) so that it does not depend on Georgian or Russian seaports. And the fact that the separatist authorities of Abkhazia will be completely obedient to their Armenian “masters” and accept the fact that the initiators of this plan does not even raise any doubts about the “Sukhumi-Sea Gate of Armenia”.

At the same time, the organization of transit through Abkhazia will lead to a sharp strengthening of the position of Armenian nationalists in this territory (where Armenians will already constitute the majority). The attractiveness of separatist Abkhazia for "diaspora" Armenians will increase, as will the attractiveness of Armenia, which essentially controls this territory. In order to attract Armenians from the diaspora to the Caucasus, the Armenian government needs “air gates in a resort-controlled city.”

The Armenian authorities have been trying unsuccessfully for a long time to attract the diaspora scattered around the world to the Republic of Armenia and Azerbaijani Karabakh occupied by it. But the diaspora is "spoiled." The Republic of Armenia, which is in blockade and landlocked, is not particularly attractive to it. As well as "land" Yerevan.

It’s another matter if the representatives of the diaspora arrive in “essentially” Armenian “Abkhazia”, “an Armenian outpost on the seashore”, and only after that, in the Republic of Armenia, and considering Sukhumi as a “seaside resort” of Yerevan connected with unhindered transit via the railroad. And here we must understand that this separatist territory with "its own" (pro-Armenian) laws, even Russia that occupied Abkhazia, will not decide everything. In this case, Pashinyan’s Armenia will be a huge winner.

Who loses in this case will definitely lose - only the Abkhaz and Georgian peoples.

Abkhazians with the onset of an influx of Armenians on separatist territory, who (and there is no doubt) the puppet authorities will allow them to acquire real estate here, will turn into a small minority that does not decide anything on their native land.

It will be possible to forget about the return of Georgian refugees to Abkhazia with the beginning of "Armenian transit" and with the acquisition of the status of actual "sea" and air gates of Armenia by Sukhumi. Representatives of the “Armenian diaspora” from “trophies” illegally buy their houses and lands.