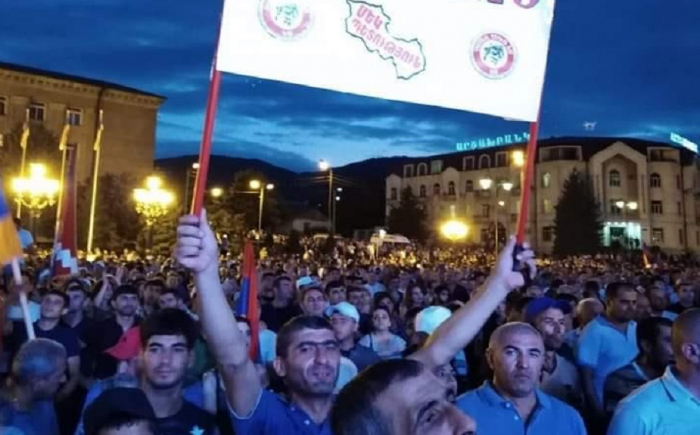 On August 5, 2019, in the occupied Azerbaijani Khankendi at the opening of the Pan-Armenian Games, the Prime Minister of Armenia Nikol Pashinyan almost directly announced the annexation of the Azerbaijani lands of Karabakh (“Artsakh” is Armenia, and point ”).

These words of Pashinyan are completely repeated by the slogans that sounded here on the square in Khankendi (Stepanakert), as well as in Yerevan in 1988 in the then USSR by nationalist rallies. That is how the efforts of Armenian nationalists would seem to be a monolithic power - the USSR - at first until crack.

Calls for a “miatsum” (“reunification”) - specifically, the separation of Karabakh from Azerbaijan and its annexation to Armenia, ultimately led Russia in the form of the USSR to a catastrophic collapse in 1991. But at the same time, Armenian nationalists were the main victims of their Russian provocation forced to serve themselves. And with their help they carried out the occupation of Azerbaijani lands, genocide and ethnic cleansing.

It is very strange that now there has not been any reaction to the words of Pashinyan sane Russian patriots. Moreover, some in the Russian Federation took this statement for granted. All this suggests that the Armenian lobby is once again pulling Russia into an adventure called Miatsum. Or rather the third time.

In the previous two times, drawing the Russian lobby into an adventure with the creation of the so-called “great Armenia” based on historical lies, myths and falsifications, already led Russia to bloody disasters.

• For the first time, they led to the 1917 revolution, the collapse of the Russian Empire and a bloody civil war.
• In the second - to the collapse of the USSR.
• And today, for the third time, alas, by following the Armenian provocateurs, Russia may lose statehood altogether and the Russian Federation will disintegrate - the remaining "stub" of a once great power.

For the third time in history, Armenian nationalists are pulling Russia into their adventures as mortal enemies of Russia itself. After all, the previous two times, Russia supported the Armenian adventures in the following circumstances:

Now in power in Armenia, too, are open enemies of Russia, who came to power through the “Maidan” coup in 2018. Pashinyan and his team do not even hide that they are working for its geopolitical opponents of Russia, in the person of the United States and Western countries. Prime Minister Nikol Pashinyan “extorted” the enemy of Russia, George Soros, in his government, as only Russophobes were selected. But at the same time, Moscow continues to entertain itself with illusions that “Armenia is an “ally” of Russia and are even ready to render military support to it so far.

Russia runs the risk of stepping on the “Armenian rake” for the third time, and the consequences of this can be fatal for the country and its people.

Recall the background. As early as about the second half of the 19th century, the Armenian lobby managed to introduce its representatives into the top leadership of Russia. At the same time, Mikhail Loris-Melikov played a terrible role in the fate of the empire. Moreover, it’s not even about trying to solve “Armenian issues” in Turkey using Russia. Loris-Melikov, with his liberalism towards revolutionaries and interior ministers, “bred” Russian terrorist revolutionaries who, in the end, killed the short-sighted sympathizing Armenians Emperor Alexander II.

It was through Armenians that revolutionary extremist ideas that destroyed the empire poured into Russia from the West. Suffice it to recall that the Armenian terrorist and social democratic organization “Hnchak” was created in 1887 - that is, 11 years earlier than the similar Russian revolutionary Social Democratic Party of the RSDLP.

The Russian leadership made the Armenian leadership short-sightedly support (against Turkey) the Armenian terrorist organization Dashnaktsutyun, which then launched a revolutionary terror against Russia itself during the revolution of 1905-1907. Just then, if not the Miatsum, then the preparation of the Miatsum, ethnic cleansing of the indigenous Azerbaijani population on the lands of Western Azerbaijan began.

Armenian terrorists killed both Russian officials and police officers, as well as the peaceful Azerbaijani population in Zangezur, Karabakh and other places that claimed to be the lands of the future "Armenian state". It was, so to speak, "the first stage of the miatsum." And of course the enormous role of the Armenian lobby in the catastrophic revolution of 1917.

In an effort to use the Armenians in the war against Turkey, the tsarist government suicide "amnestied" Dashnak terrorists, hoping to use them against Turkey. Including terrorists Garegin Nzhdeh and Drastamat Kanayan (killer of the Baku governor Mikhail Nakashidze). These bandits became commanders of militants who, during the First World War, carried out under the cover of the Russian army unheard of atrocities against the peaceful Turkish and Kurdish population. But this does not mean that Garegin Nzhdeh and Drastamat Kanayan “fell in love” with Russia. During World War II, they fought on the side of Hitler and again participated in the killings of Russian people.

At the same time, the Dashnaks did not stop the revolutionary subversive work against Russia. Both directly and through their "agents of influence." Suffice it to recall that leaders such as Milyukov and Kerensky, who played a key role in that revolution, made their entire political careers thanks to the support of the Dashnaks, whom they, in turn, defended in every way, acting essentially as their agents.

At the same time, upon submission of the same Dashnaks, Miliukov maniacally demanded the destruction and dismemberment of Turkey in the Armenian interests, scolded the tsarist government for "insufficient activity" in this direction, accusing it of "conspiring with the Germans." According to historians, it was Milyukov who launched a campaign of monstrous slander against Tsar Nicholas II and his family in many ways contributed to the overthrow of the monarchy. And only then Russia was plunged into a long-term civil war, melting millions of lives.

For the second time, historical Russia in the form of the USSR was put under the influence of the Armenian lobby artificially ignited in 1988 by the Karabakh conflict, which was clearly agreed with the external enemies of Russia and aimed at the collapse of the great country.

After all, if a country is united and intends to continue to be one, then what in principle does it matter to whom this or that territory is administratively subordinate? But raising the issue of Nagorno-Karabakh and the “Miatsum”, Armenian nationalists essentially made it clear that the days of a great power were numbered. It was also a “signal” to the forces that were breaking up the USSR - “it began”. The empire will be “cut” along the borders of national entities. So in the end it happened.

At the same time, in the midst of the “Karabakh Miatsum”, plans were outlined for the further collapse of Russia's “remnants” in the form of the Russian Federation. We are talking about plans for the dismemberment of Russia along the borders of autonomies, prepared by academician Sakharov and his wife, Armenian nationalist Elena Bonner.

The "lobby" for such a dismemberment, the Armenian lobby chose Georgia. It is no coincidence that Sakharov called it the "small empire" (in the view of the destroyers of Russia, any "empire" looks like evil). And in relation to Georgia, "training on the collapse of Russia" was paradoxically, carried out by the forces of the Russians themselves.

After all, the "independent" Abkhazia and the so-called South Ossetia is nothing more than a prototype of the future "independent" Mordovians, Chuvash, Udmurtia and Karelia, and possibly the "independent" Urals, Siberia, "Ingermanland" and other fragments into which the "well-wishers" plan to dismember Russia. And it is the Armenian lobby that creates precedents for this.

At present, by “launching” the annexation of Karabakh, Pashinyan and the Armenian lobby, in fact, are drawing Russia into a murderous process, which, in its final, cannot end except the collapse of Russia.

Indeed, if Russia supports the plans of the Armenian nationalists to redraw the borders in a state where it doesn’t even have the strength and capabilities that the Russian Empire and the USSR had, it means that the same plans were “boomerang” almost immediately striking Russia itself. Using the Armenian precedents of separatism and the “Miatsum”, they will begin to divide it alive and tear it to pieces.

The most interesting thing is that the main “helpers” in this process, the collapse of Russia, will be the very same “brothers Armenians” who can very well organize the “Kuban”, “Don”, and Stavropol “republics” to make them Armenian "Estates". About the same as Georgian Abkhazia has already turned into the Armenian patrimony, where there are more Armenians than the Abkhaz themselves.