To serve Armenian nationalists is a humiliation for Russians and Russia. Zatulin is banned from entering Armenia! 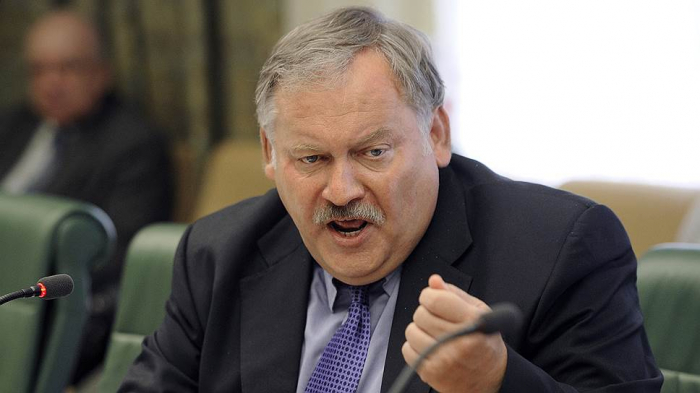 "A faithful servant" of the Armenian lobby and Armenian nationalists, Konstantin Zatulin found himself unwelcome in the Republic of Armenia itself. Zatulin received a letter from the Armenian parliament saying his visit to Armenia was undesirable. "It was sudden for us, we received a letter from the head of the foreign relations department of the National Assembly of the Republic of Armenia. We were told that my visit was undesirable and that my statements were damaging to the Republic of Armenia," said a statement from Konstantin Zatulin, who is used to being "the most welcome guest" in Yerevan and thought the Armenians of Yerevan would be grateful for his faithful service to the interests of the Armenian lobby, forever.  "I consider this as an insulting step," Zatulin said.

Regarding the prohibition, Russian political analyst Sergey Markov made an interesting comment to Konstantin Zatulin, pointing to the enormous influence of the Armenian lobby in the Russian Federation, which Zatulin served:

"State Duma deputies are shocked that Konstantin Zatulin is prohibited to enter Armenia. After all, everyone knows that Zatulin has been Armenia's main Russian lobbyist for 30 years. But do not worry, all will be well with Zatulin. It's not Armenia behind him now, but the most powerful Armenian community in Russia, which is much stronger than poor, mountainous Armenia. The Armenian community in Russia includes not only over a million Armenians, but also a huge number of Russians like Zatulin or Artem Sheynin or Mikhail Delyagin.  The Armenian community in Russia controls huge financial, political and media resources far more than Pashinyan does. "Gazprom", "Gazprom Media", Russian TV channels. Everything is in their hands. They control Russian media. And in many ways Russian politics and economy. Konstantin Zatulin has excellent relations with them. They have been and are supporting him.  That is why he stated directly that despite the fact that the Armenian authorities do not let him into Armenia, he has always been and remains completely pro-Armenian."

But the thing is that in Yerevan politicians have come to power who, firstly, have clearly set a course for a break with Russia and, secondly, for whom the Russian Armenian lobby and the insane revanchists from the Karabakh clan, whom Zatulin has always served, are direct competitors in the struggle for power in Armenia. It is clear that the decision "not to let" the faithful servant of the Karabakh clan into Armenia was taken at the highest level.

As for efforts made by Zatulin in the interests of Armenian nationalists outside Armenia, in the same Sochi or occupied Abkhazia (where Zatulin lobbies for sale of land and real estate to Armenian immigrants) Pashinyan and his team are not very interested. After all, they themselves are not going to move to Abkhazia, hoping to keep their state where it is now.

After the main lobbyist of Armenia in Russia Konstantin Zatulin the authorities in Yerevan banned entry to Armenia of Margarita Simonyan as well. The chief propagandist in Russia, who is largely responsible for the Russian media's sharply pro-Armenian stance. In other words, it was made clear in Yerevan that Russian Armenians and their interests are no longer "an edict" for Armenians in the Republic of Armenia.

The way Zatulin was " thrown out" and the way Armenian nationalists in general treat Russians, even those who have served them faithfully, should be a lesson to Russian patriots. And Russians need to draw conclusions from this before it is too late.

Zatulin is a quintessential example of a Russian politician who has surrendered the interests of his country and his people to the nationalists of a small embittered ethno-religious group, which for centuries has itself been a symbol of shame and humiliation in the East. For centuries, Armenian leaders themselves have been groveling before Muslim and Georgian rulers, receiving in return the right to live and trade in foreign lands. But they were not particularly trusted, since Armenian protagonists routinely betrayed their benefactors. It was naive, to say the least, to hope that the Russians would have it any other way.

All the more so because the "Armenian project" began to be promoted in the 19th century, after European colonizers began "patronizing" it. The tutelage was given by those colonisers, who were initially against Russia and its expansion in the east. At the same time, Armenian nationalism began to take hold amongst groups of people of the Armenian Gregorian faith, including those not related to the Hay ethnic group.

In other words, despite all the words about "gratitude to Armenians for Russia" and "friendship", Armenian nationalism is originally a project of Russia's enemies. And to serve these nationalists is essentially to betray Russia.

It should be noted that Western Europeans have never allowed Armenians to rule over them and be pushed around. The position of the representatives of the Armenian community in the West was very, very low, although understandably, they were allowed to do business and earn money. However, representatives of the Armenian lobby are not in charge of propaganda and do not determine foreign policy in France or the USA. Americans and French use Armenian nationalists, but do not allow them to direct the policy of their own countries.

Thanks to people like Zatulin, Russia finds itself in a unique situation. It is the only empire, now a former one, which allowed its policies to be completely subordinated to the interests of the Armenian lobby. In the interests of this lobby it has supported separatism across the board, resulting in the Ukrainian disaster - a fratricidal war in which Russia is suffering an ignominious defeat. The Russians have become a symbol of humiliation around the world, Russian assets are being confiscated, Russia is losing influence everywhere. Most importantly, those separatist "scraps" that Russia has seized from its neighbours for the sake of the same Armenian lobby will still have to be given back.

Everyone in Yerevan sees and comprehends this very well. Therefore, they are already openly saying that Armenia needs to abandon Russia and follow US and French policies. And the ban on Zatulin's entry is a signal to those Russian politicians who served the Armenian lobby: "We do not need you in Yerevan any more".