Who ordered the war in Abkhazia and why on the anniversary of its beginning nobody remembered Tskhinvali and Karabakh? 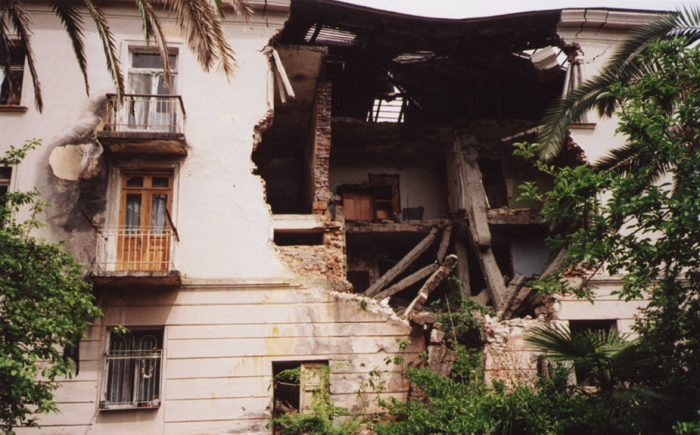 August 14 marks the 27th anniversary of the outbreak of war in Abkhazia, which eventually turned into a tragedy for hundreds of thousands of people, the genocide of the Georgian population of Abkhazia and the expulsion of more than 300 thousand people from their homes. Moreover, no one gives an answer to a simple question: why the war was unleashed precisely in August 1992 and who “ordered it”.

And the answer is obvious, if you look at the background of events and especially pay attention to what happened in another conflict region of Georgia - Tskhivali (or the so-called South Ossetia), about which, analyzing the causes of the war in Abkhazia, pro-Armenian media and “analysts” for some reason intentionally "forget".

Meanwhile, in the summer of 1992, the Tskhinvali conflict was actually “extinguished”. The so-called Sochi Agreement (“Agreement on the Principles for the Peaceful Settlement of the Georgian-Ossetian Conflict”) was signed.

Russian President Boris Yeltsin and Chairman of the State Council (head of Georgia) Eduard Shevardnadze signed this document in Sochi on June 24, 1992. The hostilities in the Tskhinvali region ceased, and a mixed (tripartite Russian-Georgian-Ossetian peacekeeping contingent was introduced into the conflict zone. The status of the Tskhival region was postponed, but no one questioned the territorial integrity of Georgia.

Also in accordance with the Sochi agreements:

-          the warring parties pledged to cease fire and withdraw their armed formations from the contact zone;

- Russia pledged to withdraw from South Ossetia the engineer-sapper and helicopter regiments stationed there (through which the separatists were supported);

- A Joint Control Commission (JCC) was created, which was to monitor the ceasefire, the withdrawal of armed forces, the dissolution of the self-defense forces and the security regime in the contact area;

- The Joint Control Commission was attached to groups of military observers and the Joint Peacekeeping Force;

- the parties pledged to immediately begin negotiations on the economic reconstruction of the region and the creation of conditions for the return of refugees. The application of blockades and economic sanctions was declared unacceptable.

As a result, by July 1992 the hostilities near Tskhinvali, which had fallen to the level of single fire contacts and raids, were stopped. On July 14, 1992 (a month before the start of the Abkhaz war), peacekeeping forces consisting of three battalions (Russian, Georgian and Ossetian).

Thus, a precedent was created for the resolution of the Karabakh conflict. And in Moscow, the Armenians began to speak openly. Like, you see, Ossetians had the same autonomous region as the Armenians of Nagorno-Korrabakh, the question of its status was postponed, but peace came, Ossetians and Georgians live in their villages, no one expels anyone, and existing refugees will have the opportunity to return to their homes. Why don’t you and Azerbaijanis go for it?

But such an option categorically did not suit Armenian nationalists. They have already carried out the genocide of the population of Khojaly, other Azerbaijani cities and villages of Karabakh. The Armenian separatists and occupiers did not want to hear about the return of Azerbaijani refugees to Khojaly and Shusha and the "postponed" status of Nagorno-Karabakh within Azerbaijan. They needed a precedent for ethnic cleansing and genocide.

The Armenian lobby began to do everything to provoke a war in Abkhazia. And it did it very cunningly. On the one hand, fomenting separatist sentiments among the Abkhazians, and on the other hand, demanding that the Georgian leadership “urgently take control of the railway through Abkhazia, along which the military cargoes of Russia went to Armenia.

The Georgian leadership eventually fell into this Armenian trap. What happened next - everyone knows perfectly well.

Moreover, the Abkhazians, even drugged by separatism, initially did not want to kill their Georgian neighbors and carry out genocide according to the “Khojaly scenario”. Even the separatist leader Ardzimba said something from the very beginning about the "friendship of the Abkhaz and Georgian peoples." But the Armenian "curators" and Armenian militants from the Baghramyan battalion (where they also "were sent" militants from Karabakh, who already had their hands to the elbow in the blood of the civilian Azerbaijani population) "tried." They specially organized such atrocities in order to force even those Georgians who hoped to continue to "get along" with the Abkhazians to leave their homes.

And of course, after the outbreak of the bloody Abkhaz war, no one remembered the precedent for resolving the conflict in Tskhinvali in accordance with the Sochi agreements and did not require the Armenian aggressors and separatists to agree to the same agreement with Azerbaijan. They forgot about this precedent, although life in the Tskhinvali region began to normalize. And then the Armenian lobby through its puppets in the leadership of the Ossetian separatists specially organized an aggravation of the situation in Tskhinvali, which led to the well-known events of August 2008.