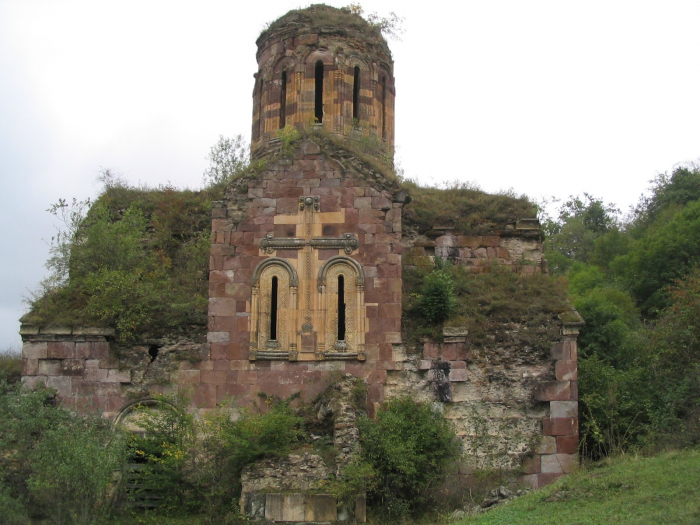 As we see, the customs road too was occupied. It designates that this road stole cattle on a pasture the Turkmen tribes which lodged in valleys of Kvemo's Kartli.

Tells one more monument which belongs to late centuries of the feudal period about the importance of this road. It is the stone bridge on Poladauri's river, on transition from the Shulaversky gorge. Called by his name that village Akh-Kerpi that means "the white bridge". In the village the Armenian population. According to the oldest, on age, people, Armenians moved at the tsar here Irakli the second in spite of the fact that on cemeteries we didn't see tombstones is more senior than the XIX century.

Here the specified settlements are in the top belt of Poladauri, near Gudzhabi. They were occupied by Edzhibishvili's families which were landowners in those places. In the book of accounts of 1721, at the inventory of all villages, in Karaspuore, among landowners mention Tushmalishvili's family in the top and lower Nadvaleti. They are those Edzhibishvilis which were mentioned in the aforesaid Persian text because Tushmali on Persian is meant by the gatekeeper (the security guard of doors), the valet. Here, therefore, in the Georgian text the mentioned Dondar Edzhubisshvili corresponds Persian — Dondar-beg Tushmal.

According to these documents leaves that Esdzhubishvili's family (they are mentioned in other documents as Edzhibisshvili), in average years of the XVII century, from Laurie the tsar Luarsab and his son Simon moved. Then their posterity I came into Somkhitsky settlements for construction and into a fortune at Growth (1651). Their name and a surname means a position of the security guard (guard) of doors.

If such witty decision is proved on the other hand, we would know old of Edzhubisshvili-Toreli. Especially as Kartli knows their hereditary possession in Kvemo.

The Georgian-Persian document according to which in 1661 Shakhnavaz, to Mestumre (goste priyomnik) Dondar Edzhubisshvili, his brother and children, gives Somkhitskiye selishche-Karaspuori and Nadvaleti is more interesting. In the Persian text: "Dondar-beg Tushmalu is given … To his brother Zurab and his sons Shegverdi and Gamrik … The Somkhitsky villages of Karasafuri and Nadvaleti, will be built up and will lodge, and to approve property for itself".
Here the specified settlements are in the top belt of Poladauri, near Gudzhabi. They were occupied by means of Edzhibishvili who were landowners in those places. In the book of schyot of 1721, at the inventory of villages, in a karaspuor, are mentioned by landowners in the top and lower Nadvaleti Tushmalishvili's family. They the same Edzhubisshvili which were mentioned in the aforesaid Persian text because Tushmali on Persian is meant by the gatekeeper (the security guard of doors), the valet. Here, on it, in the Georgian text the mentioned Dondar Edzhubisshvili corresponds Persian — Dondar-beg Tushmal.

In such conditions it is possible to think that when that Gudzhabi turned the village, the family Edzhibi (Edzhubishvili) is multiplied subsequently and they received the name from here. The residence дворянв to the village Gudzhabi is marked on Vakhushti's map. Maybe there was Edzhib, a guards, the keeper of the Wolf door about whom we spoke. Such name is confirmed in Georgia in 1609 when in Tashiskari there was a war to the Crimean Tatars. Georgy Saakadze blocked in advance the road to the gorge on which it was possible to run in Akhaltsikhe. Ioseb Tbileli writes: "we weren't afraid at all, roads were blocked in Kortana where the guards, the keeper of doors was the senior". Means, on Kortaneti Road, a certain Shalva was the senior keeper of doors.
The similar circumstance should be assumed in the top belt of Poladauri, and then, the name of Gudzhabi will become more clear.