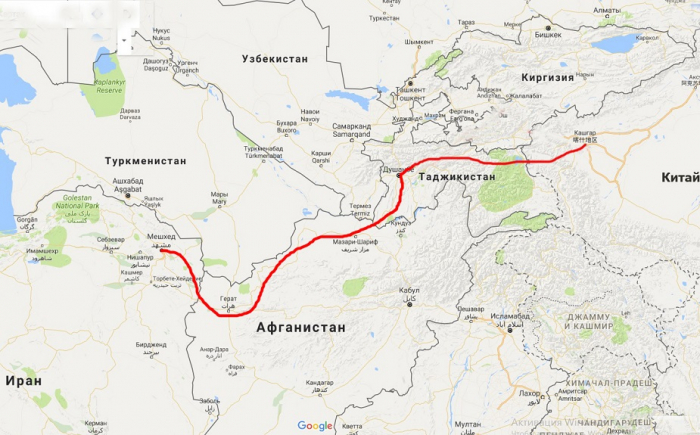 On 12 May 2022, a trilateral meeting of the Foreign Ministers of Russia, Azerbaijan and Armenia - Sergey Lavrov, Jeyhun Bayramov and Ararat Mirzoyan - took place in the Tajik capital of Dushanbe, within the framework of the meeting of the CIS Foreign Ministers Council. The main issue of the meeting was the preparation of a peace treaty between Azerbaijan and Armenia, the unblocking of communications in the region, including the Zangezur corridor.

And just a few days later, in the same Tajikistan, the situation in one of the regions, namely Gorno-Badakhshan Autonomous Province (GBAO), which occupies the highest part of the Pamir Mountains, became sharply tense. On May 14, several hundred residents of the region's administrative center, Khorog, came out to protest and demanded the resignation of GBAO head Alisher Mirzonabot and Mayor Rizo Nazarzoda, removal of all roadblocks in the regional center, and "an end to the persecution of Badakhshan residents.  The protesters gave the authorities until 4:00 p.m. on May 16 to consider their demands. After authorities in Gorno-Badakhshan refused to consider dismissing the region's governor and mayor of Khorog, calling the protesters' demands "illegal," a large group of local youths marched toward the regional administration. They were met by Tajik law enforcement officers who used rubber bullets and tear gas near the town of Chinak.  According to preliminary data, one person was killed and several were wounded.

At first glance, there is absolutely no connection between the two events. However, in reality, both the issue of the Zangezur corridor and the issue of the Pamir, key in the most important in today's geopolitical agenda of the development of new trans-Eurasian communications and corridors.

Kavkazplus has already repeatedly written about the colossal importance which the historical Zangezur region of Azerbaijan is gaining today; its western part is a part of the Republic of Armenia. But no less important may be the "mountain knot" of Central Asia, where the mountain systems of Tien Shan, Hindu Kush and Himalayas converge. At the center of this knot lies the Pamirs, a mountain system actually divided between Tajikistan, Afghanistan, China and Pakistan. Most of the Pamir's territory belongs to Tajikistan and there is the Gorno-Badakhshan Autonomous Region. The history of the latter needs to be discussed in more detail.

There were three autonomous regions in the USSR outside the RSFSR. Two of them, Nagorno-Karabakh and South Ossetia, became notorious for the fact that the first two hotbeds of separatism emerged here, first in Azerbaijani Karabakh and then, at the instigation of the same Armenian provocateurs, in Georgian Shida Kartli, where the Bolsheviks created the South Ossetian autonomous region in its time.

But the third autonomous region outside the Russian Federation (and the only one in Central Asia) has not become a hotbed of separatism. Though during the civil war in Tajikistan in 1992, local authorities arbitrarily raised its status to "autonomous republic. Clearly at the instigation of the Russian Federal Security Service - the Committee for State Security (Gorny Badakhshan was part of the border zone, and the border zones were completely under the control of the CSS).

At one time, many predicted a hotbed of conflict here as well, similar to the Karabakh, Tskhinvali or Abkhazia conflicts. Some forces clearly connected with the Armenian lobby in Moscow, taking advantage of the deployment of the Russian military in Tajikistan, even tried to "develop the topic" of the prospects of a separatist movement with demands to annex Gorno-Badakhshan to the Russian Federation. But other forces (also influential) sent the provocateurs away and in 1997 the status of "autonomous republic" was quietly annulled as if it had never existed, and the region was returned to it and is still an autonomous region today.

At the same time, the real issues in this region are solved not so much by the government in Dushanbe, but by a man who has no formal relation to Tajikistan or to the former Soviet Union at all. This is Aga-khan IV, the spiritual leader of the Ismaili religious community.

Mountain Badakhshan is one of the few regions in the world where Ismailis are an absolute majority. The Ismaili doctrine is historically widespread among peoples united by the common name of "Pamiris" or "Pamiri Tajiks. Their languages are significantly different from Tajik (largely identical to Persian - Farsi). In addition to Tajikistan, Pamiri Tajiks also live in parts of the Pamirs that are part of China, Pakistan and Afghanistan.

The Pamirs have lived and are living thanks to the humanitarian assistance of the Aga Khan Foundation. During the civil war in Tajikistan, it was the Aga Khan who prevented the economic blockade of Gorno-Badakhshan. The Aga Khan IV as a religious leader and as a "benefactor" is in fact a silent "master" here, whose authority is much higher than that of any Tajik politician. He visited Gorno-Badakhshan Autonomous Province several times (in 1995, 1998, 2008).

The peculiarity of the situation is that Tajikistan itself, firstly, is "in the orbit" of the Russian Federation (Russian troops are stationed here, the country is a member of the CSTO). Secondly, Tajikistan, on the basis of "pan-Iranian solidarity and great Iranian nationalism" cooperates with the Islamic Republic of Iran. And just like Tehran, Dushanbe geopolitically "gravitates towards France.

However, the Pamirs, including the population of Gorno-Badakhshan, have a different geopolitical "orientation" associated with its spiritual leader.

At one time there was a struggle for the Pamir and for the few mountain roads passing through it between the British and Russian empires. In the end, Russia managed to include the present-day Mountain Badakhshan in its sphere of influence through the Emirate of Bukhara, which recognized its authority. Other areas of Pamiri Ismaili settlement, even those that were formally part of independent Afghanistan and China, were directly or indirectly within the British sphere of influence. The influence of the British was much greater here than in other areas, such as Afghanistan and China. For one simple reason: the British managed to " domesticate" the spiritual leader of the Ismaili community.

The 46th Ismaili Imam Hasan Ali Shah was among the elite of the Qajar power and was the son-in-law of Feth-Ali Shah. He was appointed governor-general of the southern province of Kerman and in 1830 was awarded the honorary title of "Aga-Khan". This title was subsequently carried by all his descendants who became Ismaili Imams.  The British influence was greatest in the province of Kerman at that time and there is no doubt that it was then that the "rapprochement" of Agha Khan I with the British took place.

After the death of Feth-ali-shah in 1834, the Aga-khan came into conflict with the next Qajar ruler, Mohammed Shah, and effectively began acting as an independent ruler of Kerman. However, after two years of confrontation, Aga Khan was captured along with his many relatives. After a year's imprisonment he was sent into exile. In 1840, with the support of the British, he again rebelled against the Shah, but again failed and fled to Afghanistan in 1841.

At that time the First Anglo-Afghan War was going on, unsuccessful for the British in general. Aga Khan greatly helped the British expeditionary corps, which was in fact "trapped", to retreat from Kandahar through Kabul to Peshawar, mediating in the negotiations between the British and the Afghans. The actual saving of British troops from defeat was later "credited" to Aga Khan.

Likewise, his successor, the current Ismaili leader, Aga Khan IV, is a member of both the British and the world elite. Back in 1967, the Aga Khan IV founded the Aga Khan Foundation (AKF), a private, non-profit international development agency. The Foundation aims to "improve the quality of life of the most vulnerable communities of Central and South Asia, Africa, and the Middle East by mobilizing human, financial, and technical resources. The main areas of the Foundation's work are: "agriculture and food security, economics, education, early childhood development, health and civil society."

Obviously, with the current food crisis caused by the war in Ukraine, the role of the Aga Khan IV and his Foundation increases manifold. But beyond that, we should not forget that Aga Khan IV has essentially informal but enormous power over the region of Ismaili settlement, despite all the state borders in the Pamir region.

In Afghanistan, for example, the change of government and the arrival of the Taliban had no impact on the lives of Ismaili populated districts in Afghanistan's Badakhshan Province. It is possible that in general the coming to power of the Taliban was partially "coordinated" with the Aga Khan. Even in communist China, which is part of the notorious Xinjiang Uygur Autonomous Region notorious for abuse of power and persecution of Muslims, the Tashkurgan-Tajik Autonomous Region also lives "its own life".

In this regard, it becomes clear why "sometimes" Gorno-Badakhshan has become "turbulent" lately. The formal reason for the protest is the dissatisfaction of the population with the local authorities and appointees from Dushanbe. However, in reality, the authorities in Dushanbe are trying to achieve full control on their border with China, not allowing "amateurism" supervised from outside by the same Aga-Khan here. And the protests are a wake-up call to both the authorities in Tajikistan and their patrons in Moscow, Tehran and Paris not to think about "crossing the road" to emerging transit routes and not to launch their own without coordination.

After all, after the routes from China to Europe through Russia became blocked because of the aggression in Ukraine, transit through Kazakhstan, Azerbaijan and Georgia began to develop rapidly, with the prospect of increasing it after the "launch" of the Zangezur corridor. As a result, the Kremlin began to think feverishly about the "alternative. And they remembered that the way from East to West can theoretically be laid through Tajikistan where there are Russian troops.

And then there are "options". First, to negotiate or "punch a corridor" between Tajikistan and Iran (possibly through Tajik-populated northern Afghanistan), then to Armenia. From Armenia, a long-time dream of Armenian nationalists, a "corridor" to Russia through Georgia, with the dismemberment of its territory and the elimination of Georgian statehood.

But this path must initially pass through the Pamirs and the Ismaili settlement zone, i.e. the "fiefdom" of the Aga Khan, and therefore the zone of Her Majesty's interests. After all, here and only here Tajikistan borders on China.

Despite all the seeming adventurousness of this option of the transit route, it is clearly being worked out. To all appearances, either not coordinating or not coordinating enough with London. That is why it is quite possible that they decided to "give a warning" through the Aga Khan. Time will tell how well it will be perceived.