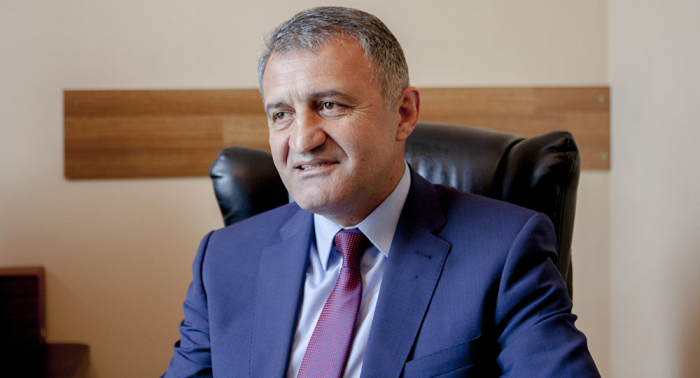 Annexation of the Tskhinvali region through the illegal so-called "referendum" on joining of the separatist entity "South Ossetia" to Russia is becoming increasingly likely. In any case, the separatist puppet Anatoly Bibilov on the eve of the second round of so-called "elections" of "president of South Ossetia gave an interview on Russian television, where he stressed the need to "join the Russian Federation:

The victims of genocide and lawlessness in Bucha and other Ukrainian cities that have been under the Russian occupation can well tell about what this "ideology of law" under the Russian occupation is. Or, for example, over 300 thousand Georgian refugees who still cannot return to their homes. It is absolutely unclear on the basis of what "laws" their houses and lands have been seized and their relatives and loved ones killed.

At the behest of the Kremlin handlers today Bibilov is actively agitating for a so-called "referendum" on the annexation of the occupied Georgian territory of the Tskhinvali region.

"The referendum will definitely take place. The most important thing is that this decision by the people gives confidence in the future of our people, and not only. I would like to emphasise that it gives confidence to our entire Russian world, to the LNR and DNR, they are waiting for this. Today we are all witnesses to the fact that the decision we made to recognise the DPR and LPR was absolutely correct. The actions we are taking to make our people feel good are also very important for Russia, when many are turning away, but we are coming because it is our world. Russia is our historical motherland and we should not forget it" - states Anatoly Bibilov directly.

It remains to be seen what is "good" for Ossetians as seen by Russian occupants, and why the Kremlin now needs annexation of Tskhinvali.

The thing is that the Kremlin is preparing so-called "referendums" not only in occupied Tskhinvali, but also in parts of the occupied Ukrainian territories. And in the territories where the "referendums" are planned, the atrocities of the occupants are not yet as "outrageous" as they were in Bucha and other occupied regions of northern Ukraine that were recently liberated from the occupants. And there is an explanation for this.

The Russian Federation does not intend to annex the Kiev, Chernigov and Sumy regions of Ukraine. Neither is it going to proclaim separatist so-called "people's republics". Therefore, here, without any "flirtation", the occupiers began the genocide of the civilian population almost immediately.

But the Kremlin has other plans for the south of Ukraine, the Kherson region and part of Zaporizhzhia, which are already occupied and adjoin the Black Sea and the Sea of Azov. The Russian Federation intends to annex these lands in order to obtain a "land corridor" to the previously annexed Crimea. As a result, the scale of terror here is smaller and they are even "flirting" with the population by handing out rations for the time being. It is somewhat similar, but on a much larger scale, as the occupants have been "flirting" with the Abkhaz and Ossetians for many years.

But these rations and the occupiers' "kindness" will have to be worked off. Oleksiy Arestovych, adviser to the head of the Ukrainian presidential office, made this statement. According to him and according to the General Staff of the Ukrainian Armed Forces, the Russian occupiers are planning to organize a forced mobilization of the population for the war with Ukraine in Kherson Region. The entire male population of the occupied region will be put "under arms" and thrown to the Ukrainian army's positions for slaughter. Whoever does not agree can simply be shot as "Banderovites" and "Nazis". Before this, the occupiers intend to hold so-called "referendums" on the creation of so-called "people's republics" and their subsequent "annexation" to Russia. In a way similar to the illegal "plebiscites" in the occupied Crimea, Donetsk and Luhansk regions in 2014, but without unnecessary ceremonies and with great terror, at gunpoint and instant reprisals against "dissatisfied" people.

The occupants are in a hurry. As early as 10 April 2022, the General Staff of the Ukrainian Armed Forces said that in Nova Kakhovka, the occupants had engaged the capacity of local printing houses to prepare propaganda materials (brochures, booklets, posters, forms) to hold a "referendum on the establishment of the Kherson People's Republic". Ukrainian intelligence also described the mechanism for holding such a "referendum".

"Locals are sure that there will be no real voting, except for show polling stations organised as a 'picture' for the Russian media. "Voting" will be formalised with passport data collected when receiving "humanitarian aid". In order to receive food rations, residents of the occupied territories had to fill in questionnaires with personal information," the Ukrainian Defence Ministry's Main Directorate of Intelligence said on 19 April.

At first the so-called "referendum" was planned for May 2022. But recently it became known that Russian occupants will organize a pseudo-referendum in Kherson region very soon - 27 April 2022. (i.e. on Wednesday of next week). This was reported by the Operational Command "South" of the Ukrainian Armed Forces, stressing that the date has been postponed (from May to April).

"Trying to "legitimise" the occupying power more quickly, as always all laws and norms are disregarded. The fact that the "referendum" is scheduled in the middle of the week, on a working day, further emphasizes that the will of the local population is not of interest to the invaders, while the prepared scenario knows the result", - stressed in the command "South", one of the areas of responsibility of which is the Kherson region.

Right after the "referendums" it seems that a total mobilisation of men in the occupied territories will begin and they will be sent straight to the slaughterhouse. This problem is very grave - it is no coincidence that the same Oleksiy Arestovich offered the residents of the occupied part of the Kherson region three options for action:

"Fellow citizens, if they are trying to take you into the Russian occupation army, you have three choices: First - hide, as surprising as it sounds. The second one is to leave the territory as long as possible. Third, if you are drafted, go to the Ukrainian side with a gun in your hands. You will be heroes for us, who were able to make your choice in a difficult situation," the advisor to the head of the Ukrainian presidential office said.

Although it will be difficult to actually avoid being sent into the "massacre " of the war on the side of the occupiers, the Ukrainians forcibly mobilised by the occupiers will still be on their own soil. It will be easier for them to either flee, hide or take cover, or go over to the side of the Ukrainian Armed Forces. But Ossetians and Abkhazians who were sent to war in Ukraine for the interests of the Kremlin will have nowhere to go.

The fact that one group of Ossetians that did not want to fight in Ukraine for the first month of the war was returned home is not an indicator. The Kremlin has not subjected them to reprisals so far because it does not want to "scare" residents of the occupied Tskhinvali region and Abkhazia before "referendums" and annexation.

But after the so-called "referendum" Ossetians will have nowhere to go. And all the men, in fact, will be sent to their certain deaths in Ukraine. The same thing awaits Abkhazians, if, by analogy with the Tskhinvali region, occupants hold a "referendum" and annexation there.