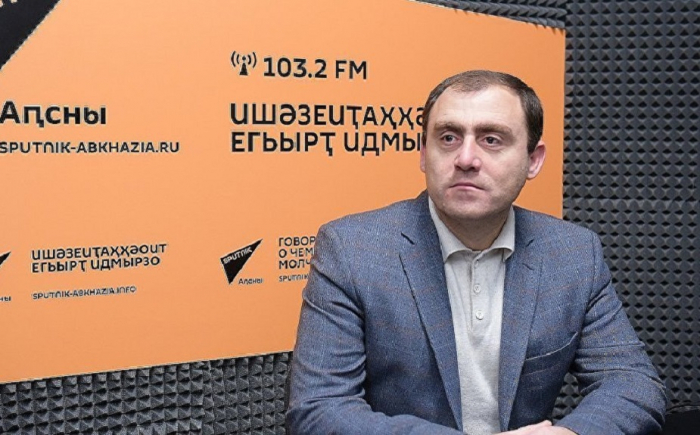 And finally it became obvious who the situation in Abkhazia ultimately depends on. No way from the Abkhazians themselves - in fact, they do not decide anything in their self-proclaimed “republic”. Above them are the “senior comrades” from the “ancient long-suffering people”, who determine the conditions under which the Abkhaz will conduct a dialogue with other peoples and whether they will conduct it at all.

“The conditions for dialogue with Georgia were called in Abkhazia,” reports the Russian news agency RIA Novosti (ria.ru). And who called these conditions? Levon Galustyan, who formally holds the post of “vice speaker” of the Abkhaz separatist “parliament.” However, really Galustyan means much more in separatist Abkhazia than the same puppet separatist “president” Raul Khadzhimba.

“The dialogue between Sukhumi and Tbilisi is possible only with Georgia’s rejection of belligerent rhetoric regarding Abkhazia and the desire to actually change relations with the republic,” Levon Galustyan told RIA Novosti in an interview. He also noted that the entire history of the post-war development of Abkhazia shows that the Georgian authorities, no matter what political force they represent, "want to enslave the Abkhaz people."

Also, according to Galustyan, conciliatory statements, which recently regularly are heard from Tbilisi “obviously do not cost anything,” because in the framework of the Geneva discussions the Georgian side “refuses to sign an agreement on the non-use of force against South Ossetia and Abkhazia”.

Everything is clear with “independent” Abkhazians. The Armenian “master” decides for the Abkhaz people, on what conditions to conduct a dialogue with the Georgian people. Whether they want to have a dialogue between the Abkhaz and the Georgians or not, the Armenian “masters” did not even bother to ask. They just say "Georgians want to enslave you." In principle, this should be understood as follows: “you are already our slaves and we will not give you up to other “masters ”.

But the Georgian people do not want the enslavement of the Abkhaz brothers at all. He wants to reconcile with them and live in a common state in which both Georgians and Abkhaz will flourish. But since the representatives of another ethnos make statements on behalf of the Abkhaz, without even asking the Abkhaz themselves, it seems that the Abkhaz actually fell into slavery to the nationalists of the people who had been enslaved for centuries.

But there is nothing worse and worse in the world than nationalists with the features of “former slaves” who became “masters”. They will not rest until they “squeeze out with the light” of those who are completely dependent on them. It is what we, alas, see in the latest tendencies of the “mastery” of the Armenian lobby in Abkhazia.

The Abkhaz may be, and would like to break out of the Armenian bondage, which exists as a separatist “independent Abkhazia” - but the “overseers” do not even allow them to begin negotiations on this.

The degradation of the Abkhaz ethnos “under the strict supervision” of such as Galustyan, alas, becomes irreversible. Such figures simply do not give any chances to break out of the separatist impasse.