What does the Armenian contingent in Kazakhstan do? 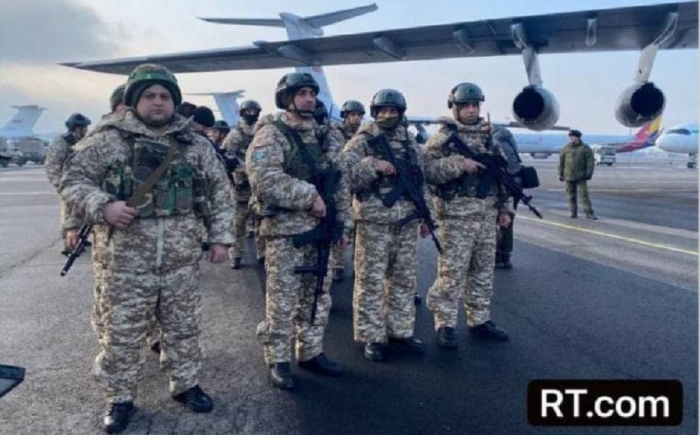 The actions of Armenian nationalists and the Armenian lobby against Georgia over all these long years have been disguised and " behind the scenes". Through the hands of Russia Armenian nationalists sought to weaken, dismember and destroy Georgia, but they tried "to keep Armenia out of the picture". The same separatists in Abkhazia and the Tskhinvali region were supported by Yerevan not directly, but through the separatist so-called " Artsakh" that was created in the occupied Azerbaijani territories. And even when during the war in August 2008, Russian planes were taking off from airfields in Armenia to bomb Georgia, Yerevan did not say much about it and did not stress that they are "with Russia" and that they are "allies in the CSTO".

Consequently, Armenian nationalists can talk hypocritically to Georgians about "friendship and brotherhood" to their eyes, while continuing their intrigues and anti-Georgian activities behind their backs.

But with Kazakhstan and the Kazakhs it worked out very differently. Armenia, together with Russia, immediately sent more than 100 troops to Kazakhstan to take part in so-called "peacekeeping operations" as part of the Collective Security Treaty Organisation (CSTO) forces that took control of key facilities in Kazakhstan. Moreover, the introduction of foreign troops (CSTO) to suppress the protests in Kazakhstan was announced not by anyone, but by Nikol Pashinyan personally and one had the impression that he almost personally sends them. The Armenian propagandists are not only not hiding the fact that the Armenian military, together with the Russian ones, were among the first to enter the Kazakh land, but even boasting about it.

"A CSTO Armenian contingent arrived in Alma-Ata. Everyone looked handsome and well-dressed. It is interesting that there are women in the ranks, which is very unusual, but nice". – The propaganda channel RT, led by Margarita Simonyan, wrote in its Telegram channel.

Prior to that Margarita Simonyan, immediately after Tokayev's request for help to the CSTO, gave Kazakhstan an ultimatum (demanding to recognize the annexation of Crimea, refuse to switch to the Roman alphabet, fully submit to Russia in domestic affairs, etc.), which provoked the indignation of Kazakh society and the inconsiderate "joy" of Russian patriots who do not understand what adventure Russia is being dragged into.

At the same time it was reported that Kazakh law-enforcement bodies detained a car with Armenian number plates, and, judging by preliminary data, the Armenian provocateurs who were driving around Kazakhstan were purposefully destabilizing the situation. In other words, the involvement of Armenian structures in the events in Kazakhstan comes from "different sides".

One way or another, Armenians are not only involved in foreign intervention in Kazakh territory, but are doing it openly and defiantly, accompanying it with ultimatums and making no secret of the fact that they are inciting discord between Russians and Kazakhs. Of course, 100 troops that Armenia has sent to Kazakhstan, in principle, has little to do, the main "rough work" is done by the Russian military. But the fact of participation in intervention is important. There is an impression that it is Armenians who direct and coordinate Russian actions, and the Armenian propaganda does not even think to conceal it.

Of course, this could be put down to the pettiness of the nationalist ego, which is so pleased with its "importance". "We are the 'great Armenians' who are deciding the fate of the largest country in the Turkic world". But to all appearances, it is not all that simple, and much more significant forces have decided to involve Armenian nationalists in the events surrounding Kazakhstan.

Prior to this, since 2002, this very significant position by global standards had been held by Sergei Aleksandrovich Ordzhonikidze. The surname should not be confusing as it is the maternal grandson of the famous Bolshevik activist Ordzhonikidze, But his father was Alexander Sergeyevich Piradov (Piradyan), a Soviet diplomat who was the USSR's permanent representative to UNESCO from 1972 to 1982.

It appears that Tokayev worked in Geneva in a structure which can be said to have become the "fiefdom" of the Armenian lobby. Since it is hard to imagine that Piradyan-Ordzhonikidze in his 9 years of work did not bind it to the interests of compatriots on his father's side.

Apparently, it was during the Geneva meeting that Tokayev became "his" for the globalists. And, taking into account "Armenian channels", he got in touch with a force, which nowadays is not taken into consideration at all in the context of events in Kazakhstan.

Some interesting information about Tokayev was provided recently by the Russian writer, publicist and former intelligence officer Andrei Devyatov. According to him, "In 2011, Tokayev was nominated for the post of UN Secretary-General, but in the 'casting' of candidates he lost to Ban Ki-moon.

As a result, Ban Ki-moon was confirmed for a second term in 2011, and Tokayev was made his "deputy" in Geneva, having been asked to leave the "warm seat" of Piradyan-Ordzhonikidze. But the Armenian lobby is not known to give up "warm seats" to others 'just like that'.

Work period in Geneva secured Tokayev a status in world elite (member of "council of wise men" of Munich security conference) and defined pro-Western direction of Kazakhstan (which was hindered until the time by clan of "multi-vector Nazarbayev"). From Devyatov's words it also appears that further transformation of political life in Kazakhstan under Tokayev's presidency was envisaged in the framework of liberalism, so-called "European values" and financial system of "old money" of the Order of Malta, with which Tokayev has become very close in Geneva.

Meanwhile, it is known that the Order of Malta, as an international organisation with diplomatic status in the world behind the scenes, acts as an operator for the "black aristocracy of the Vatican" and coordinates its actions with both the Windsors and the "deep state of the USA". The Grand Masters of the Order of Malta are known to be approved by the Pope. At the time of the coronavirus pandemic, the role of the Order of Malta as the "silent overseer" of medicine on a global scale and closely associated with the WHO has increased dramatically.

So, the Vatican's interest in Kazakhstan is immediately apparent, far exceeding the role of Catholics in the life of the country (which are mostly represented by Poles - descendants of immigrants and exiles, compactly settled down in rural areas of Taiynshinskiy district of North-Kazakhstan oblast). It is understood that the Vatican decided to pursue its interests in Kazakhstan not through the former "workers and collective farmers" from among the Poles, but through Armenia and the influential Armenian lobby. All the more so because the Vatican knows how to "negotiate" with other first-tier geopolitical players.

The Vatican's involvement in "revolutions and Maidans" through Armenian nationalists is not the first time. It should be recalled that for almost seven years after the 2014 Maidan. The Interior Ministry in Ukraine was headed by Arsen Avakov, a creature of the Vatican. Presidents changed, but the all-powerful Avakov remained.

After Avakov's resignation last year, many wondered whether the Vatican had weakened so much. It is impossible that it did not get something "in return" for such a colossal influence in Ukraine in another region of the globe, and through the same Armenians. And now it is clear what the "compensation" will be. Alas - most probably to the grief of the Kazakh people.