Armenian claims to land under Tsminda Sameba, the Cathedral of the Georgian Orthodox Church 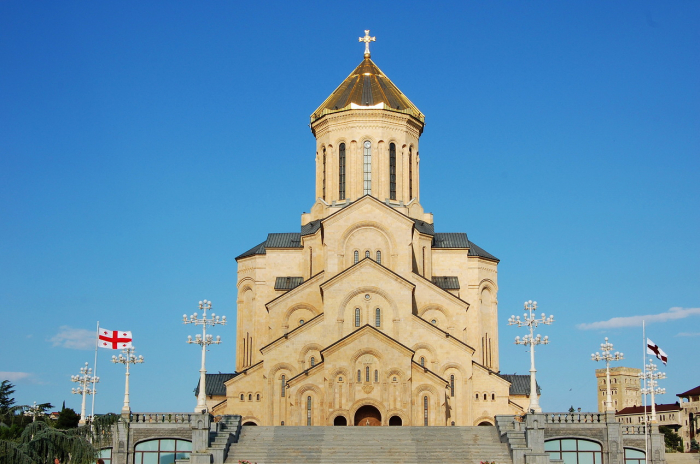 In recent years, Armenian nationalist circles have increasingly started to say that almost all of Tbilisi was built by Armenians and that hundreds of Georgian churches are allegedly "Armenian". Meanwhile, the claim that the Cathedral of the Georgian Orthodox Church in Tbilisi - the Church of Holy Trinity (Tsminda Sameba or Sameba) is allegedly 'on the place of Armenian church and Armenian cemetery Khojivank', i.e. allegedly 'on the Armenian land' can be considered a landmark of the claims.

There is even a video about it, which is now being spread on social networks

The video contains a story by a man with a Georgian surname and in Georgian, probably to make Georgians feel "guilty before the long-suffering Armenian people". But its essence is clearly anti-Georgian.

Actually, the cathedral of Tsminda Sameba was raised on the mountain (or hill) of St. Elijah. The very name of the place suggests that it was originally holy for Georgians and no Armenian churches and Armenian cemeteries could be here historically. For a long time, Armenian settlers as heretics in Georgia were simply not sold land to build their churches.

This policy changed only after the campaigns of Shah Abbas in Georgia and under King Rostom Khan (King of Kartli in 1633-1658 and of Kakheti in 1648-1656), one of the closest associates of Shah Abbas, who was at first the head of the guards and then the governor of the new Safavid capital city of Isfahan.

Rostom Khan followed not so much the interests of Georgia as those of the entire Safavid Empire, in which it was under Shah Abbas that the Armenians received simply unimaginable privileges, in particular the monopoly on the highly lucrative silk trade. Shah Abbas and Rostom Khan also encouraged the resettlement of Armenians in the new capital of their empire and, to this day, the Armenian quarter of Isfahan amazes tourists with its wealth and luxurious Armenian cathedral.

Following the death of Shah Abbas and under the patronage of his grandson Sefi Shah, Rostom Khan became the first Muslim king on the Georgian throne, where he continued his patronage of Armenians by encouraging their resettlement in Tbilisi and other Georgian cities (as he had done in Isfahan).

Nor do Georgian patriots care much for the "precepts of Shah Abbas", nor do they believe that Shah Abbas was doing "good" for Georgia. But it is precisely from the "Armenian-loving" policy of Shah Abbas that Armenian nationalists "erect" their claims to Georgian lands. But this policy was in fact quickly changed. After King Rostom the Armenian landholding was again restricted in Georgia for a long time.

Only under the Russian Empire it started spreading rapidly again. That is, the decisions of King Rostom Khan are an 'isolated precedent' for a pro-Armenian decision by a Georgian king, and were imposed from outside by the same Shah Abbas and his grandson. But Armenian claimants for Georgian lands and sanctuaries grabbed hold of Shah Abbas and King Rostom's decisions to "prove their rights" to Georgian lands in already independent Georgia. Since when did the policies of Shah Abbas become a "model" for Georgia?

The history of the cemetery and the "barbarity of the Georgians" in destroying it is described on the Armenian website of the Hayazg Foundation. 'Interesting' are excerpts from an article on Khojivank:

"The cemetery was set up on land granted by Shah Abbas in 1612 to Bebut-Bek (a member of the Armenian Bebutov family). Bebut-Bek's son Aslan Melik-Bebut, the treasurer of King Rostom of Georgia, expanded the original cemetery territory, installed a water supply, planted trees and in 1655 built the church of Surb Astvatsatsin. The name Khojivank is related to the name of Khoja Bebut (Big Bebut) .....

Over time the cemetery spread around the church expanded beyond the clan cemetery and became the largest, most famous and richest Armenian cemetery in Tiflis. Old-timers of Tiflis, those peculiar chroniclers of the city, say that it was a real open-air museum, where along with prominent Armenians and classicists of Armenian culture, ordinary people found their last resting place. Small and large epigraphic inscriptions on numerous tombstones, pictures and ornaments carved on stones provided diverse information about old Tiflis, its Armenian inhabitants, clans, families, their occupations and various aspects of social life.

In 1899 the cemetery was fenced in with a massive wall, by which time it had become the largest Armenian cemetery in Tiflis. The number of burials in the period before its destruction amounted to more than 90,000...

In 1934, following the order of the notorious Lavrenti Beria, the cemetery began to be actively destroyed; structures of the Armenian monastery Khojivank, located in the cemetery, were blown up, all chapels and crypts were destroyed (a work on the history of development and building of Tbilisi indicates that the church was destroyed under the plan of "restructuring the city"). Graves were levelled to the ground; unique tombstones of truly museum value, including stones from the tomb of the Armenian princely family of Bebutov, were confiscated by the Soviet authorities and used by Georgians as building material for supporting walls, stairwells, wall fences, etc.. ... Only a small part of the burial places were saved, by transferring the remains to other (mostly Petropavlovskoe) cemeteries. In particular, the tombstone from O. Tumanyan's grave and the obelisk of Raffi.... were saved.

Thanks to the efforts of artist Gigo Sharbabchyan and architect Ruben Aghababa, it became possible to save several graves, which were buried next to Raffi's grave. It was not until March 17, 1962 that the Pantheon of Armenian Writers and Public Figures was opened on this site from the tombstones and ashes collected in the former cemetery. On November 9, 2002, the current Pantheon site of "Khojivank...»

Nowadays, Armenian historians are once again starting to focus on the fact that Tbilisi "did the Armenians wrong" by allegedly building the Sameba Cathedral on "their" land. Due to what?

First of all, the most farsighted of Armenian politicians now begin to understand that demanding "recognition of genocide" and payment of compensation to them as "descendants" of genocide victims they will get nothing from Turkey, as the whole story with the so-called "genocide" is Armenian nationalist myth from the beginning till the end. However, another possibility emerges. As part of the normalization of relations with Turkey, Armenian nationalists want to demand restitution, that is, the return of property, land, real estate, and the like to its former owners. And there is a huge field of activity here, not only in Turkey.

In all major cities of the Ottoman Empire, from Istanbul to the smallest towns in eastern Turkey, the best plots of land and much of the real estate were once owned by wealthy Armenians. Who, sometimes by deception, sometimes through corrupt connections or other means, bought or appropriated land belonging to members of other nations.

Whereas in the Ottoman Empire the authorities tried to prevent the uncontrolled transfer of virtually all land into the hands of the Armenian nouveaux riches, and many of the facts of acquisition can be disputed, in the Russian Empire things were different. The Russian administration in the Caucasus viceroyalty, particularly in the centre of Tiflis, became corruptly dependent on Armenian merchants and financiers. Therefore the process of appropriation and purchase of lands by Armenians both in Georgia and in Azerbaijan became colossal. And especially corrupt were the appropriations by Armenian settlers of other people's lands for churches and cemeteries.

Now Georgians are being indoctrinated with a sense of 'historical guilt' towards the Armenians and are being persuaded that the entire territory on which the Sameba Church is located is 'originally Armenian'. This is a complete lie. If there was a small plot of land allocated to an Armenian crony during the reign of King Rostom-Khan, then, given how many times Tbilisi was destroyed, burned, rebuilt, the Armenian community had no special rights to this area. Not to mention the huge Armenian cemetery, which appeared here only during the Russian Empire.

In the 17th-18th centuries Tbilisi was not only a relatively small town in terms of population and Armenians were a minority here. Only after Tbilisi became part of the Russian Empire, after wealthy Armenians infiltrated the city administration and the 'boom' of Armenian resettlement to Tbilisi began, did the Armenians start to rule everything here, and the Georgian lands were seized by the resettlers. Not only cemetery and church land, but also agricultural land and land for building houses.

As a result, by the beginning of the 20th century there was virtually no more land in Tbilisi that had not been 'appropriated' by Armenians. The Georgians who were deprived of their land joined the ranks of the poor, who also had no place in Tbilisi, as the Armenian urban leadership did everything to create conditions for an additional influx of tribesmen and in principle did not even allow Georgian entrepreneurs to appear or Georgians to somehow fulfil themselves in their historic capital.

Definitely, the mentioned destruction of cemeteries during the Soviet regime is a negative phenomenon. But it must be said that it took place all over the USSR, and not only Armenian burial places, but also purely Georgian cemeteries seemed to be destroyed in Georgia. All allegedly "Armenian" cemeteries in Tbilisi were originally Georgian and mass Armenian burials appeared after the deaths of Armenian settlers who lived under the Russian Empire and consequently died here. There were fewer living Georgians in Tbilisi and consequently fewer dead people. And "Khojivank monastery" was founded on the foundations of an ancient Georgian church and the so-called "Armenian Khojivank cemetery" is in fact an ancient Georgian cemetery, like other cemeteries in Tbilisi, appropriated by Armenian settlers.

Anyway, when it was decided to build a cathedral in the centre of Tbilisi in Georgia, finding a large plot of land that would not have belonged to Armenian magnates during the Russian Empire was almost impossible. The temple was built on Mount Saint Elias, a place historically sacred to Georgians, overlooking the city and its surroundings. There is no doubt that this was once the site of an ancient Georgian church, which was later destroyed during one of the invasions. It is precisely these kinds of plots that are the first to be seized by Armenian settlers.

Now provocateurs are doing everything to start hostile litigation against Georgia and the Georgian Orthodox Church with their claims to the land where the Cathedral of Tsminda Sameba (Holy Trinity) is located. Moreover, as Armenian-Turkish relations are normalized, such attempts on the part of Armenian nationalists may become more and more persistent in order to similarly claim the land in Turkish cities.

As a result, protecting the Holy Trinity Cathedral and the land beneath it from claims is very significant and has geopolitical significance. If they give in to these claims they will claim not only the Saint Sameba Cathedral and 465 Georgian churches that are being claimed but a large part of the Georgian lands, especially Tbilisi and its suburbs.