33 years after the Spitak earthquake - time to draw conclusions 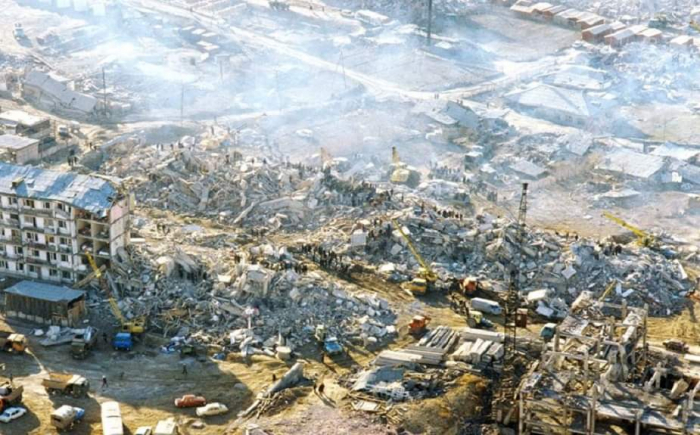 December 7 marks the 33rd anniversary of the catastrophic Spitak earthquake in the north of the Armenian SSR, which took more than 25,000 lives.

Unfortunately, the Republic of Armenia still prefers not to "remember" the events that preceded the earthquake. Nevertheless, today they must be recalled, rethought and repented if Armenia really wants to build good neighbourly relations with the closest neighbours.

And on the eve of the earthquake terrible events took place practically all over the Armenian SSR - from about 27 November 1988 "peak" of pogroms, killings and expulsion of Azerbaijanis from their ancestral lands began.

The "cleansing" operation of the Azerbaijani population was well planned. From 27 November almost simultaneously throughout the Armenian SSR, attacks on Azerbaijani villages were carried out in a coordinated manner, with the most brutal attacks being carried out by Armenian nationalists in the area of the future Spitak earthquake.

And immediately after Spitak earthquake rescuers found traces of a terrible crime - corpses of the Azerbaijani children immured by Armenian nationalists in a pipe. The circumstances of this gruesome murder are still uninvestigated and the perpetrators have not been found yet. Although it appears that the direct perpetrators of the murder did not escape the vengeance of above and were killed in the earthquake.

The "official" heads of district structures of the Armenian SSR also took part in the pogroms, killings and expulsion of Azerbaijanis. Thus, on November 27, 1988, Deputy Chairman of the KGB Mehrabyan, head of the Spitak District Department of Internal Affairs Sarkisyan and Chairman of the District Executive Committee Khachiyan arrived in the villages of Saral and Gursaly and announced to Azerbaijanis that they had to leave the villages within two hours.

People rejected this, as the weather was cold and it was fatal for the health of children and elders to move at this time, and asked for a postponement. But no amount of persuading the Armenian leaders had any effect. Hundreds of heavily armed fighters began shelling the villages. The massacre was prevented only by the Soviet military from Kirovakan, who had barely repelled the attack by the militants.

The very next day, Sarkisian and Mehrabian once again arrived in the village of Saral and, threatening to annihilate the villagers, repeated their demands.

Thirty-four buses were driven to the village, each one destined for two families. After loading only the bare minimum of necessities, the villagers, accompanied by the military, left, but on November 30, on their way to the Azerbaijani SSR, near the village of Gamzachamann Gugar. The convoy of buses was fired upon.

They killed three Azerbaijanians, including an 11-year-old boy, injured 38 others, seven of whom were seriously wounded. Most of the wounded were treated already in the territory of Azerbaijani SSR, in the Kazakh regional hospital, and as it turned out later, this saved their lives. But 30-year-old wounded woman Baladzhaeva Suraya Huseyn gizi was delivered to Kirovakan city hospital. The relatives hoped that at least the Armenian doctors would be kind to the woman there. But alas, the unfortunate woman was strangled by doctors simply because she was Azerbaijani.

That same morning, up to 40 looter trucks drove into the village abandoned by the Azerbaijanis and loaded the bulk of the looted goods in the Azerbaijani homes onto cars and drove them to Spitak. The other, less valuable part of the household goods was burnt. The picture of looting was painfully reminiscent of the actions of the militants of the "ancient Christian people" after the capture of Sukhumi in the autumn of 1993.

Admittedly, immediately after the Spitak earthquake there was hope that at least the terrible tragedy would sober the Armenian nationalists. But alas, all gestures of reconciliation from the Azerbaijani side were met with hostility.

Today, Armenian nationalists suffered a crushing defeat in a 44-day war and Azerbaijan is again extending its hand of reconciliation to Armenia. Unblocking communications and restoring economic ties could be the first steps towards real peace between the peoples. All the more reason to realise that all atrocities and brutality towards Azerbaijanis, all hatred, in one way or another, then strike at the Armenian people themselves.