Turkmen and Iranian gas to go through Georgia 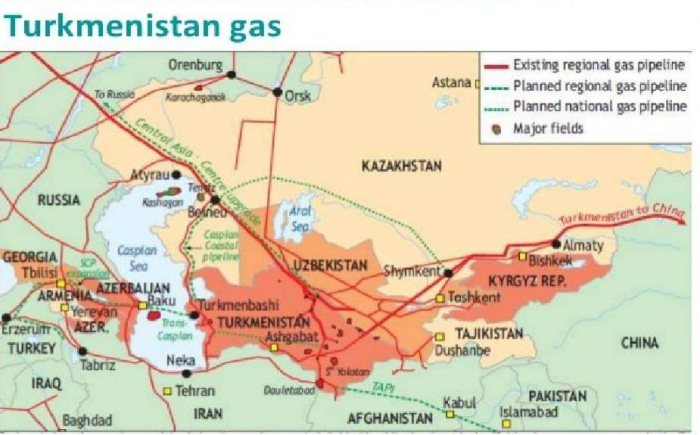 Turkmenistan, Iran and Azerbaijan are known to have the largest natural gas reserves in the Caspian region. The very possibility to export gas from the region to the west was seen as a significant factor in ensuring European energy security. And now all three "gas powers" of the region have taken the first real step towards coordinated action in the sphere of gas exports.

Earlier, as a result of the talks with the Deputy Prime Minister of Azerbaijan Shahin Mustafayev held in Tehran on November 22, 2021 Tehran and Baku agreed to swap gas supplies to Azerbaijan via Iran from neighboring countries, including Turkmenistan. And on November 28, 2021 in Ashgabat, Azerbaijan, Iran and Turkmenistan signed a trilateral agreement on gas swap supplies during the 15th Economic Cooperation Organization (ECO) Summit of Heads of State. The signing took place in the presence of Azerbaijani, Iranian and Turkmen presidents Ilham Aliyev, Ibrahim Raisi and Gurbanguly Berdymukhamedov.

In order to understand the geopolitical significance of this contract, one needs to keep in mind that there has long been a struggle for Turkmen gas transit to the West. Turkmenistan has the world's fourth largest gas reserves - 19.5 trillion cubic metres. This is 10 percent of the world's reserves. But Turkmenistan has no access to another sea except the Caspian Sea. This has been the biggest obstacle to large-scale exports.

Initially the Russian Gazprom, which had a monopoly on the purchase of Turkmen gas and its re-export to Europe, had all the advantage in the struggle for transit of Turkmen gas. However, the "exorbitant greed" of the Russian gas monopoly, which did not want to pay Turkmenistan a fair price for its gas, led to the termination of the contract and since the beginning of 2016. "Gazprom did not buy gas from TurkmenGaz at all for more than three years. However, in July 2019, Gazprom again contracted to buy natural gas from Turkmenistan, but in much more modest amounts.

Armenian "experts" were "unequivocally hinting that the gas pipeline through Azerbaijan and Georgia runs " alongside the front lines" in Armenian-occupied Karabakh in Azerbaijan and is therefore vulnerable. Moreover, the aggravation in the Tovuz region in the summer of 2020 was seen as a kind of "message" from the Armenian side to investors in gas transit projects that Armenia could militarily block gas supplies to the west at any time.

The liberation of Karabakh during the 44 day war changed this dramatically.

First of all, the military threat to energy transit routes was eliminated and it became possible to increase gas supplies from the Caspian region via Georgia to Europe. And the Ashgabat contract of 28 November 2028 is the first step in this direction. In fact, Turkmenistan has found a way to send its gas to Europe without building a gas pipeline under the Caspian Sea.

Under the agreement, between 1.5 and 2 billion cubic metres of gas will be supplied annually from Turkmenistan to Azerbaijan via Iran. The contract is open-ended and its implementation will start on December 22 this year.

Obviously, the best route for Turkmenistan to supply gas to the west is the TANAP, or Trans-Anatolian Pipeline, via Azerbaijan, Georgia and Turkey. Until recently, the main issue in filling the pipeline with Turkmen gas was to bring it from Turkmenistan to Azerbaijan. For that there were plans to build a pipeline on the bottom of the Caspian Sea. However, there is another, much cheaper route for gas deliveries, overland via Iran. And the agreement in Ashgabat of 28 November 2021 is the start of this promising project.

It turns out that in order to increase the supply of natural gas from Turkmenistan via Iran, Azerbaijan, Georgia and Turkey to Europe, it is only necessary to "optimise" domestic gas transportation flows within Iran itself. It is much easier and cheaper to do this than to build new gas pipelines under the sea. Under the sheep-breeding contracts gas exported via Georgia will in fact be replaced by Iranian gas in Azerbaijan. Not to mention the fact that in the future, with its gas export capabilities and assistance to its partners, Iran can attract investment and increase natural gas production in the Caspian region.