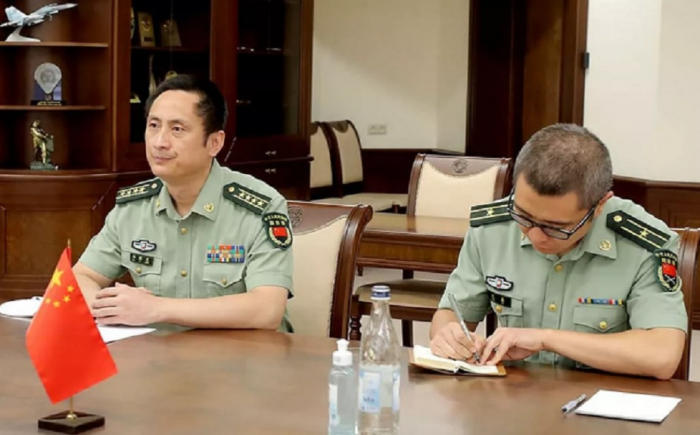 No matter how hard China tries to demonstrate its 'objectivity' and 'equidistance' from all sides of the conflicts in the South Caucasus region, Beijing's sympathies are increasingly evident. Namely, China is increasingly betting on the Iran-Armenia tandem. It is not incidental that as soon as tensions flared up on Iran-Azerbaijan border, where Teheran, dissatisfied with prospects of Zangezur corridor opening, started "rattling weapons", a landmark meeting was held in Yerevan.  Armenian Defence Minister Arshak Karapetian on Friday held talks with the military attaché to the Chinese embassy, Senior Colonel Sun Jilun.

According to the press service of the Armenian Defence Ministry, the meeting discussed the progress and prospects of bilateral cooperation in the military sphere.

The Armenian minister praised the current level of cooperation between the defence ministries of the two countries.

It should be borne in mind that China has already had the geopolitical experience of establishing its outposts quite far from the Middle Kingdom. We are talking about the patronage of Mao Tse Tung, who had quarrelled with the USSR and had rather difficult relations with the West, to the Albanian communist dictator Enver Hoxha. China took advantage of the fact that Hoxha, an "orthodox Stalinist", had broken with both the Khrushchev-era USSR and the West.

In essence, Enver Halil Hoxha turned Albania into a "Chinese base" in the Balkans in the 1960s and early 1970s. However, Beijing was not able to derive any particular benefit from this. Moreover, when economic reforms began in China in the mid-1970s, Hoxha accused the PRC leadership of "revisionism," "departure from Marxism," and so on. All Chinese specialists were expelled from Albania and relations were severed.

Much time has passed since then, and China's economic and military potential has increased. They have already started to think about " domesticating" geopolitical pariahs in other regions of the world, taking advantage of the fact that they are in confrontation with their neighbours. Iran (which is essentially in isolation) together with Armenia which is at enmity with its neighbours are likely to become Beijing's 'clients'.

In additional, China is interested in playing "its own game" on Eurasian transit communications and, with the help of its "clients", compromising some transit routes and "offering as an alternative" its own. Therefore, "Chinese conductors" in the south-north routes lobbied by Tehran and Yerevan linking the Indian Ocean to Europe through the territories of Iran and Armenia are visible to the naked eye.

Beijing was therefore clearly watching the recent aggravation of Azerbaijan-Iran relations and may well have coordinated Tehran's actions. But the geopolitical situation in the region is such that Tehran and Yerevan find themselves in isolation. Moreover, Azerbaijan has openly supported Pakistan, which has good relations with China as well, and Beijing is certainly not interested in quarreling with Islamabad because of Tehran's and Yerevan's ambitions.

It is therefore likely that Armenia and China are once again actively consulting on how to proceed if the process of unblocking communications and opening the Zangezur corridor becomes irreversible. However, it is clear that even with Beijing's help, Yerevan will not be able to influence the implementation of the agreements to unblock communications. Armenia's military capabilities, even with Iran, are not comparable to those of its neighbours. In addition, Russia, which is formally allied with Armenia, is clearly not keen on the fact that China is starting to play a game in the region without taking its interests into account.

One can only suggest to both the Armenian military and their Chinese "friends" that they calm down and do not try to undermine the unblocking of communications, vital for the very existence of Armenia.