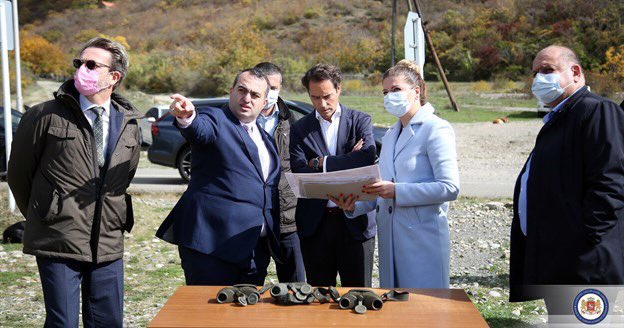 NATO Deputy Assistant Secretary-General for Political Affairs and Security Policy and the newly-appointed Special Representative for the Caucasus and Central Asia Javier Colomina visited the Administrative Boundary Line (ABL) with the occupied Tskhinvali region in Odzisi village on Tuesday.

First Deputy Foreign Minister Lasha Darsalia introduced the NATO Deputy Assistant Secretary-General to the situation across the occupied territories. Javier Colomina thanked the Georgian authorities for hosting him at the ABL.

“I was very impressed with what I was told. I received an ample explanation on the ABL and the situation here, humanitarian effects of the situation on the local population, healthcare, trade, and families that are divided by the administrative border. It is of special concern for NATO the buildup of fences that is taking place since it is clear that Russia is not respecting the international agreements in that sense,” Javier Colomina claimed.

Special Representative for the Caucasus and Central Asia underlined the significance of work carried out by the Incidents Prevention of Response Mechanisms (IPRM) and the European Union Monitoring Mission (EUMM), as well as the Geneva International Discussions (GID). “We need to support all efforts in resolving the situation,” he claimed.

NATO Deputy Assistant Secretary-General arrived in Georgia for a two-day visit within his Caucasus regional trip. The tour aims “to identify ways to enhance NATO’s engagement in the Caucasus further.”